You are here: Home / Events / Get to know your Amigos: Q&A with Los Amigos Invisibles

Los Amigos Invisibles are one of those bands that needs no introduction in the Latin popular music world. Since 1991, these Caracas, Venezuela natives have been lighting dance clubs and fútbol arenas on fire with their up-tempo and fun brand of disco/acid-jazz/funk-rock.

The Amigos were in Austin for a slot on Austin City Limits fest last fall and played a crazy after-show. We spoke with the band and got some songs on tape. But if you missed them in ’09, Los Amigos Invisibles are scheduled to play at Antone’s on April 2.

Austin Vida is giving away tickets to see the Amigos. Swing by Mi Casa on Sixth Street for our Nacional Records listening party tonight, March 2. The party starts at 8.

Below are three short (and sometimes silly) Q&A interviews we conducted with guitarist José Luis Pardo, bassist José Rafael Torres and keyboardist Armando Figueredo last fall. They’re coming next month, so it’s time you got to know your amigos.

Photos and video by Ajay Miranda 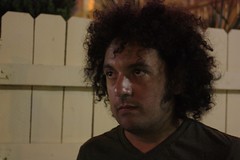 The band name translates literally to the Invisible Friends, which sounds like a superhero team to me. If you could have any superpower, what would it be?

Los Amigos have played lots of music fests. What are some changes you’ve seen in the festival circuit and what do you think about festivals today?

Cheo: I’m just so happy live music is back again, in the spotlight. Because, you know, DJ time was boring time. Live bands’ time is good. For a while, DJs were in the spotlight because they could play a lot of different styles and make people dance. And now bands have caught up with the fact that people go out to party and to have fun, and it’s good that the bands are out there now to make people happy.

You guys have lived and played in many of cities. What’s the dancing like in different cities around the world?

Cheo: I mean, everywhere people are so scared to dance because people will think they’ll make a fool of themselves. But I don’t know, music has the power to make people think they’re by themselves so they can feel comfortable and feel things that will make them dance. We try our best to make people think it’s a Friday night, and you just have to get down and get busy.

You’ve played in Austin a few times. What’s your impression of the city?

Cheo: Well, Austin is like a very strange, very particular place. You get the idea, when you’re outside of Texas, that people in Texas are very conservative and not multicultural, but you come to Austin and it’s people from all over the world with different tastes. People here, you know, love music and it’s strange. Whenever we’re here, we know it’s gonna be a fun gig.

Lastly, which song title from your album Commercial, which is romance-heavy in its lyrics, best describes your philosophy of love?

Cheo: I would say “Sueño Erotico” by far, because I strongly believe that if you have to own something, you’ll only own whatever you don’t say. Your dreams are the only things you own. 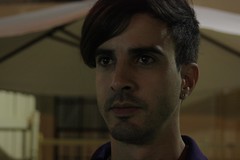 Your hit song from the new album is “Mentiras”, which is Spanish for “lies”. What’s the worse mentira anyone has ever told you?

Odnam: The worst lie that somebody ever told me was the whole Saint Nicholas story—Santa Claus, man. When I found out that wasn’t true, I felt horrible.

If you could have any superpower, what would it be?

Odnam: I would be totally like Peter Petrelli (from the show Heroes), just trying whatever power I want.

What’s the music scene like in Venezuela, where you’re from?

Odnam: There is a lot of things going on creative-wise, and there’s a lot of kids trying to do their own parties and put their music out there, but there is not much of an industry. You either have big shows sponsored by advertising companies for whatever product, or very small shows of independent bands here and there. It’s a difficult market; it’s a disappearing market. But there is a lot of creativity.

Which song title from your album Commercial best describes your philosophy of love?

Odnam: I’d say “Loco por tu Amor” because whenever I’m in love, I go crazy. And that’s a Beyonce song. 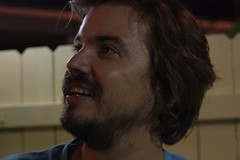 If you could have any superpower, what would it be?

Catire: Invisibility. If I could be invisible, I would definitely like to be in the women’s locker room at the gym.

Which song title from your album Commercial best describes your philosophy of love?

Catire: “Vivire para ti.” It’s a very pure, straight love song about a guy and a girl saying how much they love each other and how they can’t live separate from each other. And that’s how I feel about loving somebody.

Be sure to check out Los Amigos Invisibles live at Antone’s on April 2.