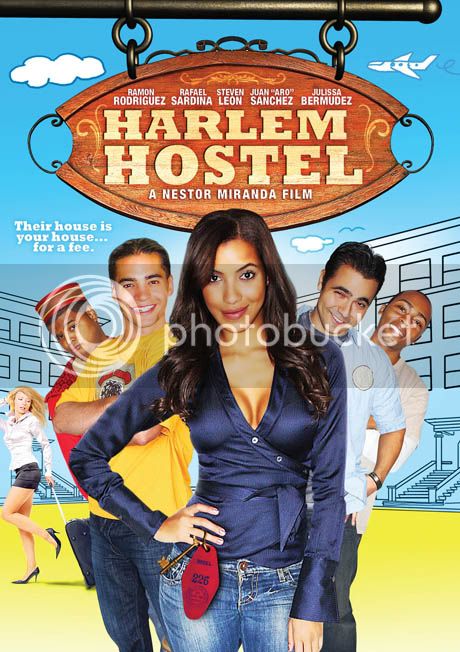 Don’t let the movie cover suck you into thinking the new straight-to-DVD release, Harlem Hostel, stars the smokin’ hot Julissa Bermudez (106 & Park, Mun2). While the Harlem Hostel marketing team was smart to make her the cover feature, it is a move that will only upset many expecting more of Bermudez, present company included. Despite the deception, Harlem Hostel was mildly entertaining and has a well-thought-out story line.

Harlem Hostel is based around the life of a young magazine writer named Benny (Rafael Sardina) and his dissatisfaction with life living at his mother’s house. Fed up, Benny decides to take up an offer from his two best friends Will (Ramon Rodriguez) and Rick (Steve Leon) to rent an apartment in Harlem, thinking that they will be “living it up” together. Of course you already knew the place was going to be less than luxurious and that it wasn’t going to be what Benny foresaw. It was all very predictable from the start.

It was at this apartment that Benny’s friend Will, who is the crazy one of the bunch with by the way, decided to get together with Rick and turn the place into a hostel while Benny was away for a week. Predictably again, Benny agrees to go with it once he sees it can make money. Surprisingly, Benny is not interested in the abundance of foreign females that his friends are so consumed with, only because his interest lies with his coworker, Julie (Julissa Bermudez), who wants to start their own magazine together. Later Benny predictably brings Julie back to the apartment during a wild party and she gets put off by the craziness and concerned about his work.

You guessed it. The party or hostel doesn’t last and Benny returns to his mother’s house. He saves his job and friendship with Julie all while learning a lesson. That lesson is you have to grow up sometime and always use your best judgment no matter what your friends try to sucker you into. What saves the movie and will keep viewers from turning it off completely is the humorous screenplay and how well the actors actually deliver it. They are put in some funny scenarios and viewers are introduced to some interesting characters. Based on the cover alone, aside from Julissa Bermudez as the focus, viewers should know exactly what they are getting with Harlem Hostel… a good rental for when there is not much else to choose from. It won’t be winning any major movie awards, but there are certainly plenty of big box office movies that are worse than Harlem Hostel.

Editor in Chief - Ian is a product of Round Rock High School and St. Edward's University in Austin, Texas. He is an alumnus of the National Hispanic Institute and learned to dance at a young age with the Round Rock Ballet FolklÃ³rico. Ian also serves as the Editor-in-Chief for Austin Vida's sister site, Red River Noise.