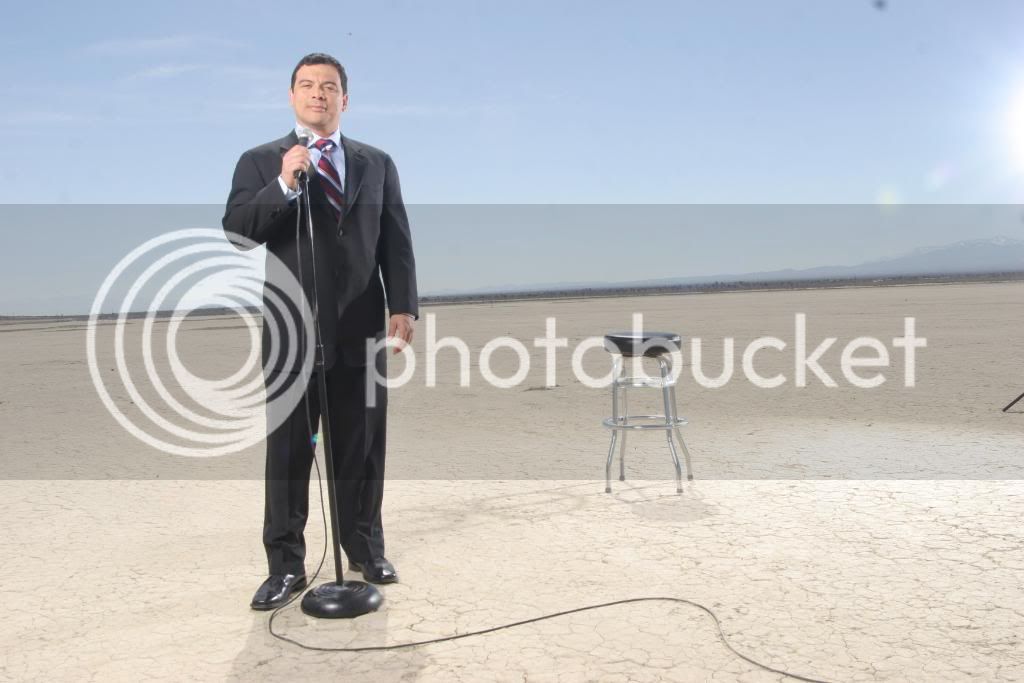 Carlos Mencia is a polarizing figure. Over the course of a 22-year career, the California-based comedian has thrived on a confrontational, ripped-from-the-headlines style of humor that takes swipes at everything from immigration to ethnic identity to celebrity. He has offended many along the way, and arguably endeared many more, with hit comedy specials on Comedy Central and HBO.

He was born Ned Arnel Mencia in Honduras and raised in the predominantly Mexican neighborhood of East Los Angeles, Calif. He adopted the stage name Carlos Mencia at the beginning of his career, after the owner of L.A.’s famed Comedy Store told him no one would believe his angry Latino persona with a name like Ned.

Mencia does come off angry at times, famous (or infamous) for getting riled up and shouting at the top of his lungs. Still, he gives a disclaimer: He’s just a comedian. It’s his job to get a reaction. He says his no-holds-barred philosophy was inspired by watching comedian Paul Mooney and the audience reactions the controversial black comic would solicit. It was after watching Mooney that Mencia adopted the following mantra: “The stage is sacred. You can say anything, as long as it’s funny.”

Mencia recently returned from performing for the troops in the Middle East. He is currently on a national club tour to work on new material for a planned comedy special in the fall. Last week, he chatted with Austin Vida via phone about growing up in East L.A., clearing up the confusion surrounding his nationality and tackling the controversial Arizona immigration law SB 1070.

Mencia stops by Austin to perform at Cap City Comedy Club on Thursday, Aug. 12. Tickets are almost sold out. Call Cap City at 512-467-2333 for ticket availability.

You’re from L.A., but you’re no stranger to Texas. What roll has Texas had in shaping your career?

Mencia: It’s one of the first places that I began to see that I had a fan base outside of Los Angeles. But more than that, it’s a state that has Laredo, which is heavily influenced by Latino culture, and then you have Amarillo, which is not like a border town at all. So I began to find the nuances and differences between this crowd and that crowd. This joke was better here, but not as good there. It made me figure out how to be universally funny—to know that a joke that was funny in Corpus Christi was funny in Amarillo and Beaumont.

Your comedy routines are often mixed with serious topics in between the jokes. What’s your goal or philosophy on stage?

Mencia: As long as it’s funny, or its intent is to make you laugh or to put you in a mental frame where the next thing I’m gonna say is funny, then I’m okay with it. That stage is sacred. You can say anything you want, as long as it’s funny. And that’s always been my guide. Sometimes, in order to make a joke be funny, you have to be a little sad. If you’re really happy and gleeful, it’s not gonna have an impact. Sometimes I have to say something to put you in that frame of mind. And then kinda go “Boom!” and yank your chain. And that just came from watching other comedians do it way before I did and so much better than I did.

When we posted that you were coming to Austin, a few of our Facebook fans had an immediate negative response. Somebody wrote something like, “Carlos Mencia isn’t a comedian. He isn’t even Hispanic.” I’ve heard people rag on you for not being Mexican but supposedly claiming you are. Can you clear up the nationality thing? And what do you make of people saying this kind of stuff?

Mencia: You know what, you could spend a lot of time thinking “Why do people think this?” or “Why do people think that?” I don’t do that. I spend my time trying to be as funny and entertaining as I possibly can. That’s what I do because that’s what I have control over. If I go up on stage and I do a joke about how I was born in Honduras but in America everybody thinks I’m Mexican, and I get off stage and somebody says or tweets that I’m not Hispanic, I have no control over that. So I don’t even spend my time on that. I spend my time trying to create and be fresh. You could spend the rest of your life trying to make people happy that are never gonna be made happy.

You were born in Honduras, but people sometimes get it confused. Some accusations are harder to confront or dispel, but something like your nationality or place of birth is easy to prove or disprove. Isn’t something fact-based like that worth addressing to people who say otherwise?

Mencia: But that’s the thing, once you get into that whole thing, you’ll end up going forever. You know what it is—when somebody doesn’t like you, they go “Well, he sucks. He’s this or that.” And no matter how many times you say, “No, he doesn’t suck; he’s funny.” And they go, “Well, I think he’s not Hispanic.” And you go, “He is Hispanic; he was born in Honduras.” Then they say, “Well, he pretends he’s Mexican.” And you say, “No, but he actually says that he’s not Mexican.” And you just keep going and going, and it never stops. Because that’s not their problem with me. Their problem is that they don’t like my comedy. And that’s okay.

Mencia: You just can’t get tricked into that stuff. You’ll kill yourself trying. So every day I get up, and first of all I’m grateful that I live in America because if I was still in Honduras, I’d still be this funny but I’d be milking a cow. I’d be under a cow and my friends would be going [in an affected Latino accent] “Hey Carlos, tell us a joke!” You know what I mean? That’s what I focus on; I try to focus on the positive. And I owe that to the fans, really. You could kill yourself. Literally, kill yourself trying to make people happy that you will never make happy.

Let’s talk about your family history. You were a legal immigrant from Honduras, but you grew up in East L.A. What was that immigrant experience like for you and your family?

Mencia: The big eye-opener was—and I can’t call it racism because it’s not about race—was how I was looked down upon in East L.A. because I wasn’t from Mexico like everybody that I grew up with. I remember when I was a teenager was the first time I really found it out. I was dating this Mexican girl, and I went to her house and I was talking to her dad, and everything was awesome. Then he asked where I was born, and I said Honduras. And he flipped out. He was like, “What?! No, he’s going to ruin the family. You cannot be with him!” I remember looking at him and going, “Whoa, what’s wrong?” And he’s like, “Honduras?! You’re not even Mexican.” And I was like, “First of all, I’m not an illegal. I’m here legally. I have a green card.” And her family was illegal. And I was like, “You have the balls to talk; you don’t even have your papers!” I remember going, “Oh my God. There’s a difference between the way we see each other in East L.A.” But then I realized that outside of East L.A., when I would hang out with my Mexican friends and people wanted to pick a fight, we were all one.

Mencia: I remember one time, I was hanging out with all my Mexican friends and we went to a football game in South Central. And a bunch of black kids started being like, “Hey, what’s up you Mexicans?!” And all my Mexican friends were like, “What are we gonna do about it?” I was like, “I don’t care; I’m not Mexican.” And they were like, “They’re talking to you too, Holmes.” And I was like “Ain’t that a bitch; now I’m Mexican.” Now that you want to pick a fight with the big black dudes, “Hey, Carlos, you’re just like us.”

It’s funny how that works.

“They don’t have an
illegal immigration
problem in El Salvador.
Because when a Mexican
went into El Salvador and
said, ‘Hey, where’s
the work?’, people in
El Salvador went,
‘We were thinking
you might tell us.'”

Your humor is very topical. You talk about current events and what’s on the news. Surely, you have material for SB 1070, the Arizona immigration law. What kind of angle are you going to take with that?

Mencia: With laws like that, I try to look at all the angles on it. I try to make sure I’m not just poking fun at one side or the other. I try to really make sure I cover all my bases. I try to go to the heart of the matter, to that one place where, whether you’re on the right or on the left, you have to laugh at the absurdity and truth of it.

Mencia: So the first thing that came to mind for me was, look, if you want illegal aliens to stop coming to America, then stop giving them jobs, for Christ’s sakes. They don’t have an illegal immigration problem in El Salvador. Because when a Mexican went into El Salvador and said, “Hey, where’s the work?” People in El Salvador went, “We were thinking you might tell us.” No one gave him a job, and that was it. So I go to that first: This is a self-made problem.

Mencia: We hire these illegal immigrants; we tell them that they can work here as long as they keep quiet and we pay them under the table, or whatever we do. And then we freak out when they don’t wanna leave, or they call their cousin and go, “Oh my God. You’re not gonna believe this. They pay you this much. This is how they live, and they have water and everything.” You know what I mean? So then I go, “Okay, what’s an analogy that’s gonna make people laugh at that moment? Where am I gonna go with that?” So I’ll think of something very visceral. There are a lot of things I can think of, but at that moment I’ll be like, “We give them jobs and then wonder why they’re here. Isn’t that like paying a hooker and then going, ‘Wait, why are you touching my penis?!'” People will laugh and then go, “Oh my God, that’s retarded.” And I say exactly. And so I start from that point, and then after that I think I can go anywhere with the law. Making fun of it or making fun of the people or the enforcement of it. Whatever it is, because I first went to that one truth where people went, “Well, he’s right about that.” And then I try to stick to making it funny. Stick to making sure that it’s not so serious that it forgets the punchline. Take it to that comedic level.