We knew something was fishy about this SB 1070 in Arizona. It just seems so clueless and out of touch, going against the common sense policing skills of local officials living in border communities. Even Tuscon’s police chief has come out against it, calling it an “unfunded mandate.” 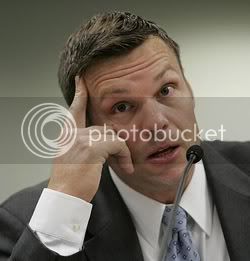 Well, as it turns out, Arizona’s controversial illegal immigration law was actually written by a Washington, D.C. lawyer who recently ran for secretary of state in Kansas. His name is Kris Kobach, which makes us wonder if his middle initial is K as well. It would suit him.

Hey, who better to give border police advice on dealing with Latinos than a white-collar lawyer from Kansas? Sorry, but we can’t help but be sarcastic about the asinine nature of this law and the shouting match surrounding it.

The law, recently signed by Arizona’s governor, will give local police the authority to question a person’s citizenship status and ask for identification to prove citizenship. All an officer needs to do so is have “reasonable suspicion.”

In the video above, Kobach explains what “reasonable suspicion” really means. Here are our favorite examples given by Kobach:

#7 Individual appears to be in transit or has recently traveled significant distance. Well, my tio was a truck driver and he was always in transit or looked like he’d been traveling long distances… because he was! But sorry, Mr. Kobach, my uncle was born in California (and not Baja).

#16 Vehicle has foreign license plates. I went to high school in Laredo, and about a quarter of the cars in town had plates that read “Frontera Tamaulipas” or “Nuevo Leon,” and in some cases “Distrito Federal.” People often live and work on either side of the border in cities like this, legally. Mexican nationals are among the most avid consumers at the Laredo shopping malls and shopping centers. Life on the border is symbiotic, and it helps the local economy.

#18 Indication from dress, appearance and demeanor, based on “totality of circumstances.” Kobach never explains this or gives examples of suspicious dress or appearance. The fact is, none of these anti-immigrant guys can explain what an illegal immigrant looks like. That’s because, appearance-wise, there is little difference between impoverished Latinos who were born in Mexico and those born in the States. Poor is poor, and Walmart is Walmart.

#19 Indication that vehicle and/or occupants have been on long trip. My family used to take road trips between California and Texas all the time because we had family in both states. Driving through Arizona and New Mexico, the car gets dusty and dirty. So do the car’s occupants, since we often stayed at highway rest stops. Our frugality kept us from staying in hotels every night of the multi-night trip. Want to see our papers because we can’t afford a room at the La Quinta Inn every night?

#9 Vehicle is overcrowded. C’mon, dude. Seriously? We’re Mexican! Overcrowding cars is what we do. It’s a “being poor” thing, not an immigrant thing. I was in so many crowded cars as a child. It’s how we got to little league games, the dollar theater y la tienda all the time.

Look, we don’t want to tell Arizona how to run its government, but we don’t want some rich a-hole from Kansas telling Arizona how to run its government either. And since we’re from Texas, a place that actually has Latinos in it, we feel we’re better positioned to talk about this issue. So let’s talk about it. How do you feel about Arizona’s new law? Let us know at [email protected]